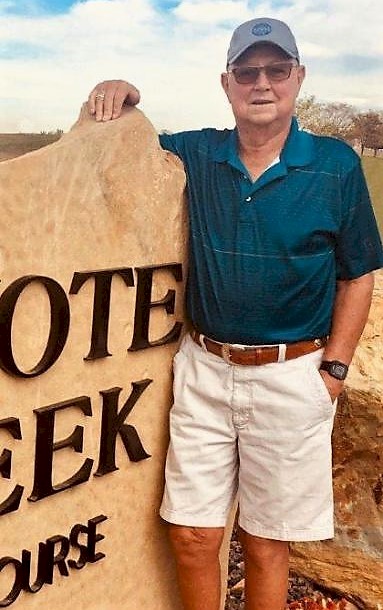 of Brighton, Colorado formerly of Kadoka, died on Saturday, April 11, 2020 at his home in Brighton at the age of 74

On April 11, 2020, Ben Handcock’s pain subsided, his foe was conquered, his spirit was lifted, and he was embraced by his Lord. Grandpa Ben/Mr. Wheat went Home.

Ben Maurice Handcock was born on May 25, 1945 in Kadoka, South Dakota to Donald and Joyce (Mansfield) Handcock. He was raised on the family farm near Long Valley, South Dakota and attended 1st through 8th grade at a country school near his home. Ben attended Kadoka High School graduating as valedictorian of his class in 1963. He was a 3-sport athlete excelling in football, basketball and track. While attending high school he met the love of his life, “his favorite cheerleader”, Patsy Hicks. He and Patsy were united in marriage on June 25, 1964.

After graduating from high school Ben attended Dakota Wesleyan University for 2 years. Realizing that his true passion was agriculture he transferred to Colorado State University where he earned his bachelor’s degree in Ag Industries Management. After graduating college, he and his wife Patsy moved back to the family farm to work with his dad and raise their 3 children - Milton, Noell and Marlon.

Following his dream, Ben continued to farm while expanding his operation into exotic cattle breeds. He was passionate about developing a high powered, top producing breed of cross bred beef cattle. With a breeding herd of mostly Angus cross cows he began to look for what would be the best fit to fulfill that passion. He fell in love with the Chianina breed. He became one of the most well known and respected Chianina cross cattle producers in the United States earning numerous championships throughout the country. He loved to show cattle and sell club calves and his young family became extremely involved in both of those aspects of the ranch.

While raising cattle or farming wheat, Ben was always interested in what was best for the farming and ranching industries. He understood that the producer and the processor needed to be connected to bring the best possible product to the consumer. This understanding led him into a new career path. In 1984 Ben sold his farm and ranch and started his 10 year career as Executive Director of the South Dakota Wheat Commission. He worked hard to help the wheat producers of South Dakota promote their product. He became “Mr. Wheat”.

The relationships that were built and the respect that was earned within the agriculture industry landed him a position as Executive Vice President of The Wheat Quality Council, a national organization. In this position, he was tasked with connecting every acre of planted wheat with all the participants including breeding, milling, baking, marketing and consumption. He was instrumental in bringing the Hard Winter, Hard Spring, and Eastern Soft Wheat groups together to form a united wheat council. He organized and led the yearly wheat tours in Kansas and North Dakota and had record participation in both. Ben and Patsy moved The Wheat Quality Council to the Denver area in 2013. He retired in 2017 as the longest tenured Executive Vice President in Wheat Quality Council history.

Anyone that ever met Ben knew right away that he was comfortable on the big stage. He had a deep love for country music and was not shy about singing at any and all opportunities. From barn dances to his kids and grand kids weddings to singing the Chianina anthem (which he wrote) at a national stock show; Ben was in his element. He would not call himself a true musician, but he could play just about anything completely by ear.


Throughout his life he felt it was important to give back to the communities that had given him so much. He was deeply involved in starting the Kadoka Jaycees, was a long time member of Kiwanis, and was elected to the Kadoka school board, a leader on the board of the American Chianina Association and an active member of Zion Lutheran Church.

The greatest opportunity of Ben’s life was the ability to be involved in his children and grandchildren’s activities. He and Patsy would be on the road 4, 5, or 6 nights a week and traveled tens of thousands of miles to watch them participate in their chosen activities every year. He was present so often at games that his grandchildren’s teammates referred to him as “Grandpa Ben!” In the spring you would find him at the finish line at whatever track meet his grandchildren were participating in; stopwatch in hand, recording every split and time. Some unfortunate and unlucky events kept Ben from ever winning a relay at the famed Howard Wood Dakota Relays, but he was so proud of the fact that he was asked to coach a relay to a gold medal at that event.