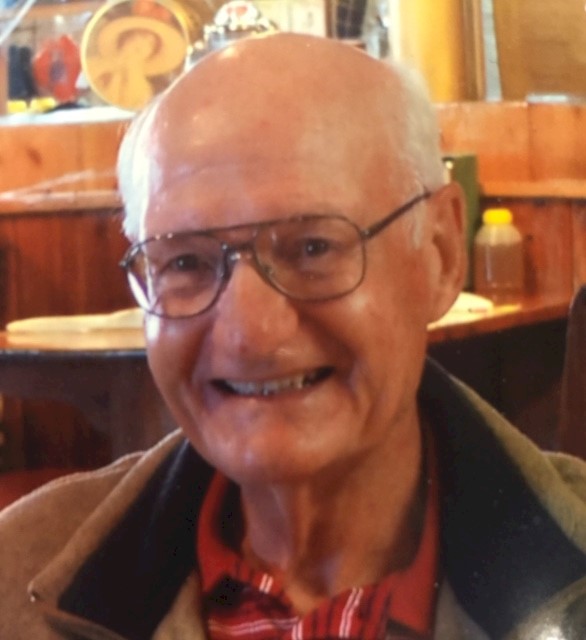 of Rapid City, formerly of Kadoka, South Dakota, died on Tuesday, February 9, 2021 at Peaceful Pines Assisted Living Center in Rapid City at the age of 94

Larry Parkinson, 94, passed away peacefully on February 9, 2021 at the Peaceful Pines Assisted Living Facility, Rapid City. His loving wife of nearly 74 years, Alvina (Eisenbraun) and his son Chuck were at his side. His youngest son, Jeff was on the phone.

Larry was born June 8, 1926 on a farm near Hitchcock, South Dakota to Sid and Hazel (Barnes) Parkinson. He was the second of six children.

The Parkinson family moved to Kadoka in 1928 where he grew up and attended school through 11th grade. During the war, Sid’s hardware and farm implement business could not get merchandise to sell. As a result, in January of 1943, Sid moved to Portland, OR to work in the shipyards. The family joined him the following May.

Larry graduated from Forest Grove High School (OR) on June 1, 1944 and was sworn into the United States Navy on June 6. Following boot camp in Idaho, he was transferred to a base in California, assigned to CASU (Combat Airforce Service Unit) 12 and left for service in the Pacific on Guam where he served for 19 months. He was discharged in June of 1946 and returned home to Kadoka.

Larry and Alvina were united in marriage on June 14, 1947 at the Presbyterian Church in Kadoka. In the fall they returned to Brookings where Larry completed his course work and Alvina worked in a local beauty shop.

Upon completion of Larry’s schooling in August of 1948, the couple moved to McLaughlin, SD. Both began working at the local newspaper, the McLaughlin Messenger owned by E.Y. Berry, who would later be elected to the United States House of Representatives.

When Congressman Berry departed for Washington in December of 1950 to begin his Congressional service, Larry and Alvina leased the Messenger. They edited and published the paper until June of 1959 when they purchased the Kadoka Press. While in McLaughlin, Larry and Alvina were joined by sons, Chuck, born June 10, 1949 and Jeff on March 1, 1955.

The Berrys became second parents to Larry and Alvina. The friendship continued for many, many years. After Congressman Berry retired from Congress, he and Rose settled in Hisega in the Black Hills. Larry and Alvina visited often. Larry would always say their conversations would begin with him asking: “E.Y. are you every going to give me this place when you no longer have use for it? E.Y. would say: “Hell no. Why would I do that?” Then Larry would tell E.Y. that he never really did pay him very well when he worked for him and that perhaps E.Y. might feel that he owed Larry more. E.Y. would ask: “What did I pay you?” Larry would answer that he paid him $50 a week. E.Y.s response was always: “Sounds like plenty to me!” That was the end of the conversation.

With the purchase of the Kadoka Press, Larry’s printing experience came full circle, as he returned to the paper where he began his newspaper experience in 1939 working at the Press Office every evening after school and on Saturdays while still in school. He jokingly said he would have made $1.25 a week if the publisher had enough money to pay him.

In 1942, the Press was without an editor, so Larry, with the help of his brother, Jerry, published the Press for 14 weeks until a new editor arrived. Larry always claimed that his dad, Sid, had negotiated a salary of $10.00 a week, but unfortunately Larry was never paid. He later quipped: “That was my first real bad business deal”.

Larry enjoyed hunting and fishing. No season (grouse, pheasant, duck or goose) passed for many years that he wasn’t there on opening day. He especially enjoyed returning to the original Parkinson family farm near Bonilla for opening day of pheasant season. Every stock dam that had fish was on his list.

After his retirement, Larry could be found almost any day, the temperature was above freezing, on the Kadoka Golf Course, which he and Dr. L.P. Swisher laid out in 1960. If the snow was too deep, he would hit balls up and down the runway, because it was always plowed.

He was preceded in death by his parents Sid and Hazel, sisters, Joyce Stout and June Starkjohn and brother Jerry Parkinson.

A memorial service and inurnment at Black Hills National Cemetery will be scheduled at a later date.

Cremation has taken place, and memorial services will be held at a later date.