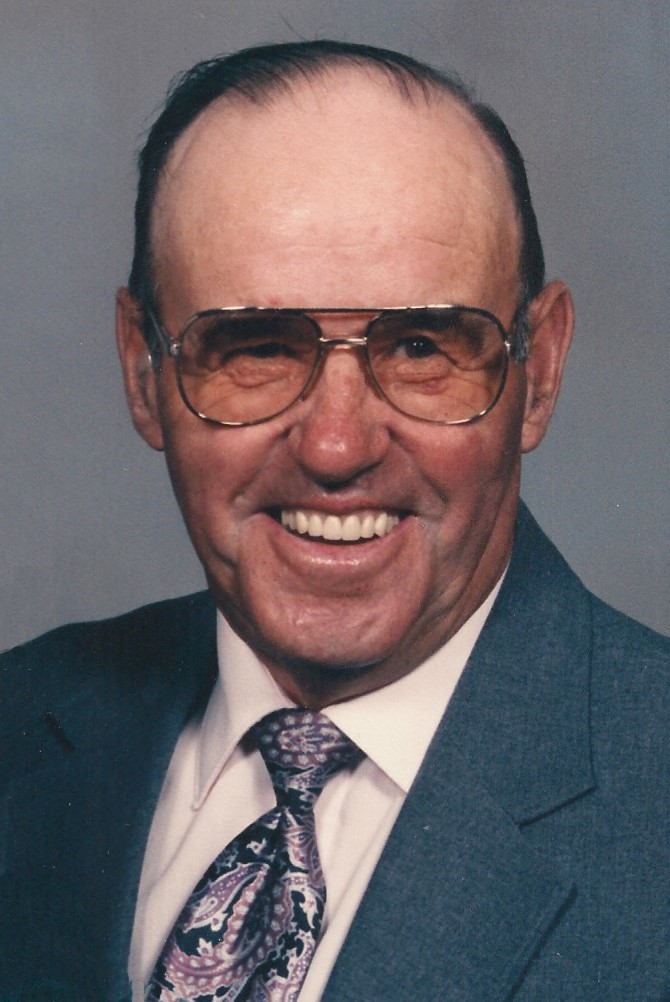 A public visitation will be held 1-6 p.m. (CDT) on Wednesday, October 21, at the Messiah Lutheran Church in Murdo, with a prayer service at 6:00 p.m.

Robert Gene Totton was born August 4, 1926 at home on a place by Hidden Timber, five miles east of Mission, South Dakota, the second son of Wilfred Leroy and Bertha (Rickgauer) Totton. The family moved into a log house in Washabaugh County in 1928, where they lived for two years. In 1930, they moved again so their sons could go to school in Norris. Settling on a parcel of land on the far southwest end of the county, they were the last homesteaders in Mellette County.

Bob attended his first eight years of school at Norris, at the Indian Day School seven miles north of Norris. He attended Kadoka High School for his freshman and sophomore year before attending Hot Springs High School his junior and senior year.

On December 14, 1944, Bob was called into the Navy. He took boot training at Great Lakes Naval Station in Chicago and troop training at Mayor Island Naval Station. His first sea duty was on a light cruiser, the Vicksburg and then he transferred to the USS Chicago. On convoy patrol duty by Okinawa, they were attacked by kamikazes. They then went on to Iwo Jima, before witnessing the signing of the peace treaty on the USS Missouri. Bob was honorably discharged from the United States Navy on November 21, 1946, and hitchhiked home by way of Hawaii where he had to wait about a week to catch an Army plane that was going to California. Back in Norris, Bob went to work for the county running the road patrol.

Bob started dating a young country lady named Ellen Weiss. Bob was baptized and confirmed at St. John Lutheran Church on January 7, 1952. On October 26, 1952, Bob and Ellen were married at St. John Lutheran Church outside of Norris. They began married life in a 24-foot trailer on the Bill, Leila, and Cars Dithmer place where Bob worked at the time. A daughter Deanna Lee was born to the couple on July 13, 1954.

In the summer of 1953, they heard of a job opening up at the Post Office in Norris. Bob applied and was appointed Postmaster on November 1, 1953, a job he kept for 31 years.

Bob was active in any community where he lived. He was fire marshall and handyman of Norris, taught NRA gun safety classes, was secretary-treasurer and head usher at St. John Lutheran Church and Norris Community building committee chairman. He worked for folks around town and farmers in the area. He spent many hours mowing county and township roads when he had finished his day at the Post Office.

With Bob’s retirement from the Post Office on April 1, 1984, Bob and Ellen moved to Murdo. After the move, Bob drove tractor for Leonard Anker for the first four years. He was handyman at the Best Western Motel for 15 years, and worked for 20 years for Low Income Housing of Murdo. He did the maintenance on the Messiah Lutheran Church where he and Ellen were members. They joined the Senior Citizens group in Murdo and he volunteered his help there as a fix-up man as well.

Bob loved to fish which took him and Ellen from Canada to Florida, to the Missouri River (where he once fell in), Yankton, and Mobridge. George Harris and Jim Root were his main fishing buddies. Square dancing was a big part of their lives for 50 years, and Bob was state president of the South Dakota Square Dance Convention.

Bob thanked the Lord for 60 happy years of marriage with his wife Ellen, and for all the friends and neighbors who made his life so full.

Bob is survived by his brother Rex Totton and his wife Nancy of Kadoka; grandson Travis Justin Holm and great-granddaughter Melinda Holm; many nieces and nephews; and special friends Butch Feddersen, Dean Faber, and Gerald and Wanda Matthews.

Bob was preceded in death by his wife Ellen on November 1, 2013; his daughter Deanna; granddaughter Heather Marie; his parents; and five brothers Richard, Will, Vern, Kenneth and Jake.

Visitation will be held 1-6 p.m. CDT on Wednesday, October 21, at the Messiah Lutheran Church in Murdo, with a prayer service at 6:00 p.m.

Private family interment with military honors will be held Thursday, October 22, at the Black Hills National Cemetery near Sturgis.

Flowers from Your Brother, Rex