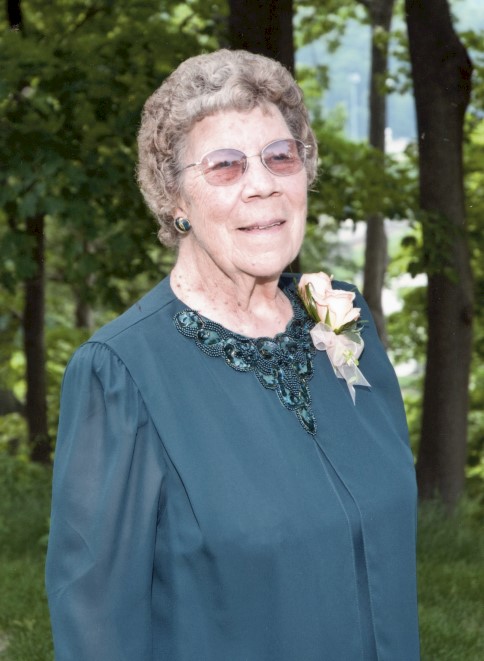 of Kadoka, South Dakota, died on Monday, January 4, 2021 at the Kadoka Nursing Home at the age of 92

Katherine “Kate” Faye Boeckman was born September 9, 1928, to Mary Prochaska Boeckman. Kate grew up in Belvidere attending all her school years in Belvidere except for two years in Kadoka. She graduated from Belvidere High School in 1946. Upon graduation she moved to Chamberlain where she worked as a switchboard operator for the telephone company. There she made many life-long friends and memories.

On October 29, 1950, Kate was married to Fred “Fritz” DeVries in Belvidere. They lived on the DeVries homestead east of Belvidere. Two children, Ruth Ann and Donald “Don” were born to Kate and Fritz. In 1960 they built a new house which fell in the path of Interstate 90 forcing a move. At that time they purchased the Kelly Freemole place and built a new home along Brave Bull Creek.

Kate was always a very active member of the Belvidere community. She was a life-long member of the Belvidere Community Church serving as Sunday School Superintendent, teacher, and even janitor. She sang in the church choir for many years as well as wrote, mimeographed, and mailed out a weekly paper for the church. She, along with other Belvidere ladies, organized many funeral dinners and potlucks for various activities. In earlier years, Kate was an active member of Royal Neighbors and for many years placed Royal Neighbor flags on member graves each Memorial Day. She was involved in bowling leagues in Kadoka as long as it remained open. Kate was active in the Belvidere School Alumni Organization for many decades. She corresponded with many past graduates as well as published a yearly newsletter and helped to organize the annual picnic. Kate also wrote the Belvidere News for the Kadoka Press. She was a member of the SD Cattlewomen’s Association on both a local and state level. For many years the local groups packed and delivered “Katy Kits” to the Wasta rest area in an effort to promote beef to South Dakota visitors.

Late in life, Kate became acquainted with an unknown half-sister, Thelma Sogge. An instant friendship formed and the entire family was blessed by this new relationship.

It is difficult or perhaps impossible to do justice when describing a life of 92 years, but I would describe Mom as having a servant’s heart. She was always willing to help and worked hard all her life. She loved her family and hosted many huge family dinners. You will be missed.

Cremation will take place and a celebration of life service will be held at a later date.

Cremation will take place and a celebration of life service will be held at a later date.